Additional topics we are working on at the Urbanism Lab:

Incremental Urbanism is a project analyzing the changing scale at which city growth occurs—from incremental change at the scale of lot and block, to large scale mega-development currently at the forefront of pro-development urban agendas. We are conducting archival and GIS-based analysis of land use change using historical maps, imagery and other data sources to capture land use and urban scale evolution. We seek to understand the social, economic/financial, environmental, and aesthetic implications of incremental vs. large-scale development.

City Cents. Where does public money go? How much expenditure is devoted to strengthening civic life? How much of it is used to address the problem of human connectivity, for example by investing in neighborhood-scale civic spaces? This project is a spatial analysis of public expenditures at all levels (city, state, federal) in an effort to understand how public money contributes — or doesn’t — to a sense of neighborhood.

Street Psychology. Psychologists and neuroscientists have produced robust scholarship documenting the effect of the physical environment on psychological well-being. While much of this work has focused on the neuroscience of architectural objects, public space or natural settings, we propose to take these insights to the street level, evaluating the cognitive effects of urban form from the pedestrian’s point of view. Our goal is to better understand the link between psychological health and theorized qualities of optimal, pedestrian-oriented urbanism. What is the psychological impact of varying pedestrian experiences as measured by the qualities of order, variety, scale and enclosure?

The Urban Void. Vacant land in Chicago: where is it? who owns it? why does it sit fallow? This research presents a typology of vacantness and probes the civic, social, and economic implications of vacant land in Chicago’s neighborhoods. See research by Steve Vance for context on this issue. 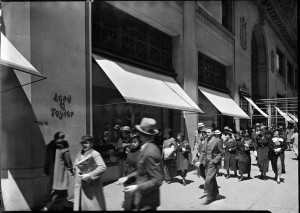