"Good Hoods" are neighborhoods that are socially diverse and well-serviced and walkable at the same time. Further, they have managed to maintain their diversity for a long time (40+ years). In other words, they are not gentrifiying, they are not declining, and they are not suburban sprawl.

This research seeks to uncover: what factors sustain long-term diversity in neighborhoods that are also well-serviced and walkable? What policy and legal mechanisms underlie them?

We are of course losing economically diverse neighborhoods (Fry & Taylor 2012), and this decline is accelerated in neighborhoods that are also walkable (Riggs 2014). This loss is exacerbated by the stability of homogeneity: rich neighborhoods stay rich, poor neighborhoods stay poor, and middle income neighborhoods change up or down, with race determining to a large degree the direction of change (Hwang & Sampson 2014). Lower-income households who live mostly around others with low incomes increased from 23% to 28% between 1980 and 2010; higher-income households who live mostly around others with high incomes doubled from 9% in 1980 to 18% in 2010. In addition, the data shows that most economically diverse neighborhoods do not remain so, either because they become more uniformly rich or they become more uniformly poor. Only 18% of neighborhoods that were economically integrated in 1970 remained integrated in 2000 (Tach et al. 2014). These changes are exasperated by income inequality overall; between 1980 and 2010, there was a significant increase in the percentage of lower-income households living in majority lower-income tracts, and upper-income households living in majority upper-income tracts (Fry & Taylor 2012). The segregation of the affluent is especially problematic because it translates to a reduction in support for public investment in cities and neighborhoods that are less well off (Reardon & Bischoff 2011). Income inequality perpetuates wealth inequality, as higher-income Americans drive higher housing prices in affluent neighborhoods (Albouy & Zabek, 2016).

The importance of income diversity is based on concepts and theories about place vitality, economic health, social equity, and sustainability. Scholars have investigated how income diversity plays a role in stimulating economic networks of interconnected relations and “exchange possibilities” (Jacobs, 1961; Florida, 2005; Glaeser, 2011), where a “richly differentiated neighborhood” is considered more resilient against economic downturn (Montgomery, 1998; Sohn et al. 2012). While mixed-income neighborhoods involving public housing have revealed weak social ties and a sense of vulnerability (Clampet-Lundquist 2010, Chaskin 2013), these dynamics are likely to be less of a factor in places with long term (stable) diversity. Income diverse neighborhoods have been shown in some cases to increase feelings of safety among low-income residents who were previously living in concentrated poverty (Briggs 2010). Place diversity is important because it may help build social capital of the “bridging” kind by widening networks of social interaction (Putnam 2000). Social mixing in one place is also considered more equitable, because it ensures better access to resources for all social groups, enabling what is known as the “geography of opportunity” (Briggs 2005;Talen 2008; Cole & Goodchild, 2001). Lack of income diversity translates to neighborhoods that experience concentrated poverty, leading to disinvestment in the built environment. Moreover, as Sampson et al (2015) argue, as these extremes remain concentrated, the advancement of mixed-income neighborhoods may be more of a challenge than anticipated. Poor physical conditions and lack of facilities play a role in perpetuating an “American Apartheid” since it is unlikely that higher-income social groups will be attracted to places with bad physical qualities and few facilities. Finally, there is a sustainability argument. Beatley and Manning (1997) define a sustainable place as one where separation by income and race is “nonexistent,” and where residents have equal access to “basic and essential services and facilities” (see also Steiner 2002).

While the above examples document a substantial literature on the benefits of walkability and income diversity, our understanding of the factors that underlie walkable, diverse neighborhoods is mostly theoretical (Grant & Perrott 2011; Tomer et al. 2011). Our research project is therefore an investigation of the factors – especially those related to policy and law – that enable walkable, diverse neighborhoods. These factors fall into three categories: (1) built environment and zoning; (2) housing and economic development policy; and (3) governance and institutions. 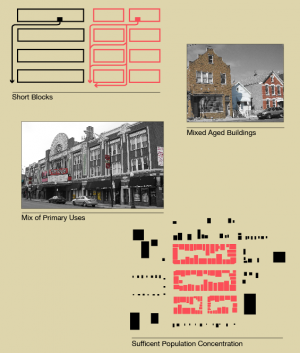